This review blog looks at a recently published paper in Seminars in Orthodontics by Adith Venugopal and Co (click here to view) . It was an interesting paper and I wanted to share the key points presented. Overall the paper has a re-look at class 3 case management, with advances in imaging and evidence helping to understand biological limits, as well mechanics which consider these limit. I found it was an excellent paper, in which the authors present a series of excellent cases exemplifying each topic.

From the above statements mechanics are to be planned around biological limits. There is scope to retract the lower incisors (there is more bone lingually), however there is less bone vertically and labially. Class 3 correction therefore requires bodily retraction and avoiding extrusion mechanics. Kleber Meireles in his excellent online biomechanics course (review here) described the use of a round wire in class 3 cases with retraction resulting in labial tipping of the lower incisor apex, into an area already deficient of bone. To avoid this a wire which can produce a force couple is required, a rectangular wire or use of torquing auxiliaries. 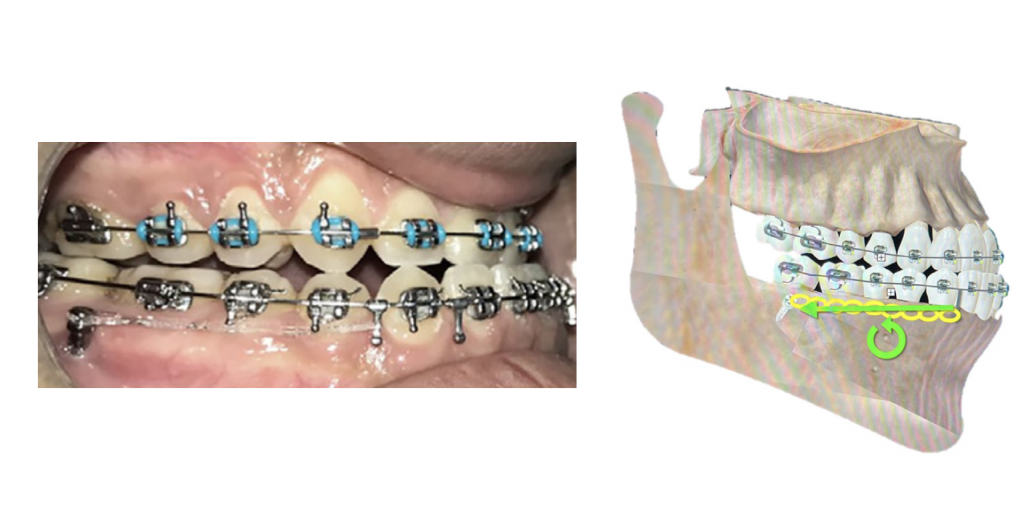 What to extract? premolars or third molars?

In the decision of which teeth to extract, smaller discrepancies point towards extraction of third molars and arch distalisation, greater discrepancies necessitate premolar extraction. What I liked about this topic was that lower arch distalisation was placed into context with premolar extractions. Lower arch full distalisation is not common mechanics, but when presented can seem like the panacea of orthodontics, it was great to see the authors placing these mechanics relative to conventional treatment planning and providing a decision tree for their use.

Continuous mechanics to correct a curve of Spee result in both posterior extrusion and anterior intrusion. The ratio is altered by the virtue of high or low angle. A high angle case has lower masticatory forces and more likely to undergo posterior extrusion (usually unwanted), likewise for lower angle cases a higher masticatory force is likely to favour anterior proclination. Solution to the above; high angle cases use bite blocks on the molars to prevent extrusion, and TADs to control premolar extrusion; and in low angle cases using anterior bite blocks on the lingual surfaces of the lower anteriors to prevent anterior proclination and facilitating posterior eruption

A simple re-look at the curve of the Spee mechanics with continuous mechanics. The authors have described relatively simple methods to alter the posterior extrusion / anterior intrusion ratios. We have detailed in a previous blog previously on the curve of Spee, click here.

I find lower arch distalisation a challenging and less predictable movement in clinical practice. here the authors have explained why lower arch distalisation can be challenging, methods of assessment and mechanics to enable the process. Specifically the use of buccal root torque accounts for the widening of the mandible posteriorly, and keeps the posterior segment in the alveolar trough.

Limits in the transverse dimension

Class 3 cases are typically compensated through buccal dental compensation, the upper posterior teeth are buccally tipped, and the lower posterior teeth lingually tipped. A class 3 patient however has thinner buccal alveolar bone in the posterior maxilla, in comparison to a class 1 case, of around 0.35mm.  The lower second molar appears to be able to compensate more than the remaining lower posterior teeth, with greater lingual tipping. The authors recommended either extractions in the maxillary arch or skeletal expansion, without which there is likely to be over burdening of the already thin buccal alveolar bone.

The authors highlighted the biological restrictions in dento-alveolar expansion of the maxillary arch in class 3 cases, with space management being recommended with changes to the biological boundaries through skeletal expansion or reduction in the need for space – through dental extractions I wonder where the limits lie for mandibular transverse compensation, and to what degree lower posterior lingual tipping maybe possible.

Overall a great review paper from which I have taken a number of clinical tips from it. The routine use of CBCT is a contentious issue, however if I have a class 3 case in which I am planning lower arch distalisation, I would require it to assess the amount of movement possible, and therefore if it is feasible. However if I plan lower premolar extractions then it is not indicated. The use of TADs has been described in a number of topics within the paper, new for me was for the vertical management to favour anterior intrusion over premolar extrusion with continuous mechanics. The paper has given me greater awareness of where the biological limits lie in class 3 cases, dare I say it, an update to the envelope of movement possible within contemporary orthodontics in class 3 management.

The lead author Adith Venugopal has been interviewed as part of the Orthodontics in Interview Podcast, which can be found here.