In this blog we explore space opening for hypodontia, with a focus on lateral incisors, which affect 1 in 60 of the population (Polder et al., 2004)

How much space is needed for an implant Vs bridge?

There are two aspects to space for a prosthetic tooth:

Space requirements for the type of prosthesis should be considered

Most clinical scenarios will permit both prosthetic options, however the differing minimum and maximum spaces should be considered where the planned space will be minimal or excessive.

How do I measure the space?

Seemingly simple yet a cause of colourful conversations between orthodontist and prosthodontist, space measurements relate to different aspects of the prosthesis:

Space measurement – at a crown level

Prosthodontic replacement with dental implants are usually positioned slightly palatal to the alveolar ridge, this does not corelate with the space measured between contact points either labio-lingually or incisal-gingivally.

Space measurement – at a root level

What specific mechanics should be used when planning for a dental implant?

Root parallelism is a key determinate for optimal implant placement, the following can aid achieving this goal

For implant placement the minimum bone height is 8mm or greater, measured from the crestal bone to the apical anatomical structure (6mm dental implants have been described but have reduced stability (Papaspyridakos et al., 2018)), with minimum 5.5mm length and 5.0mm width of bone (for 2.9mm implant diameter) (Liedke et al., 2017, Olsen and Kokich Sr, 2010). Bony deficiencies occur in hypodontia areas due to a lack of tooth eruption from the alveolus as well as the lack of mechanical stimulation to maintain bony architecture, resulting in a narrowing of the alveolar ridge, and / or a concavity in the alveolar process in the apical region, also known as an ‘hour glass ridge’(Durey et al., 2014).  Typically a bony deficiency of 25% occurs in areas of hypodontia following the loss of the primary tooth (Ostler and Kokich, 1994). It can be possible reduce the bony defect by allowing the canine to erupt into the lateral incisor space (usually through interceptive extraction of the primary canine and primary lateral incisor) followed by retraction of the permanent canine back into class 1. Through this process of canine eruption into the lateral incisor position the bony architecture is increased in height and width and maintained for implant placement (Scher, 1990).  Bony architecture can also be maintained through TAD supported prosthetic teeth, described later on.

At what age should the implant be placed?

Minimum 18 years, RCS England Guidelines 2019 (Cocchetto et al., 2019), with males later than females. This presents a challenge with the majority of orthodontic treatments being completed at the age of 14. The effects of early implant placement are of increasing infraocclusion of the implant (Thilander et al., 1999) as the remaining dento-alveolar structures continue to erupt throughout life Behrents 1985. Another common complication is root convergence which occurs while waiting for growth cessation, and another short course of orthodontics may be required (as pictured below). Some have advocated waiting until patients are 25 / 30 years of age as the rate of vertical dento-alveolar growth reduced from 1.02% per year to 0.27% per year  to avoid aesthetic consequences of infraocclusion (Schwartz‐Arad and Bichacho, 2015). 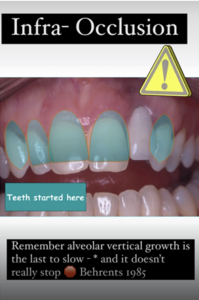 What temporary prosthesis can be used in treatment?

Prosthetic teeth can be added in a variety of ways: 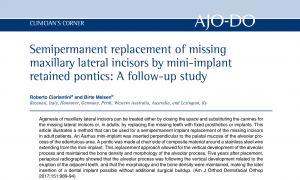 What is the best type of restoration?

A much debated topic and without clear outcome, the debate lies in defining what outcome is defined as ‘best’, below are the key considerations which will vary depending on patients preferences.

We hope you have enjoyed this first part in the new series of blogs, it came about through a conversation between us (Farooq Ahmed and James Andrews) about James’ instagram posts, which we have whisked into a blog, please do subscribe to James Andrew’s Instagram page, please do comment and subscribe for more blogs and podcasts

KALIA, R. 2020. An analysis of the aesthetic proportions of anterior maxillary teeth in a UK population. British dental journal, 228, 449-455.