Root resorption in Orthodontics
Part 1: Why and How

In this blog we will describe one of the most common side effects of orthodontic treatment; root resorption, Part 1 covers the ‘why’ and ‘how’ root resorption occurs, and the relationship between mechanics and biology based on recent publications. Part 2 will answer how to manage root resorption based on current guidelines

What causes root resorption in orthodontics?

The biological mechanism responsible for orthodontic tooth movement is also the culprit for orthodontic root resorption. When orthodontic forces exceed blood capillary pressure, occlusion of the blood vessels results in necrosis, inflammation, and degradation of the outer layers of the tooth, known as hyalinized zones. The loss of the outer pre-cementum activates osteoclastic cells, if there is an imbalance of repair of the cemental layer and its destruction, then root resorption occurs. The outcome of localised inflammation is one of three possibilities;

2.    Deep resorption: Cementum and outer dentin is resorbed and is usually repaired with cementum only, which may or may not result in loss of root length

How common is it?

An uncommon occurrence with 1-5% of orthodontic patients effected, with loss of more than 4mm of root length or a third of the root length Tieu 2014. The longevity of teeth with severe root resorption (less than 10mm) was shown to be compromised in a 5 year follow up, with increased mobility and loss of teeth Jönsson 2007.

How to assess root resorption?

The established index of root resorption was produced by Malmgren in 1982 , and uses periapical radiographs and the below grading.

·      Grade 1 mild resorption, root with normal length and only displaying an irregular contour 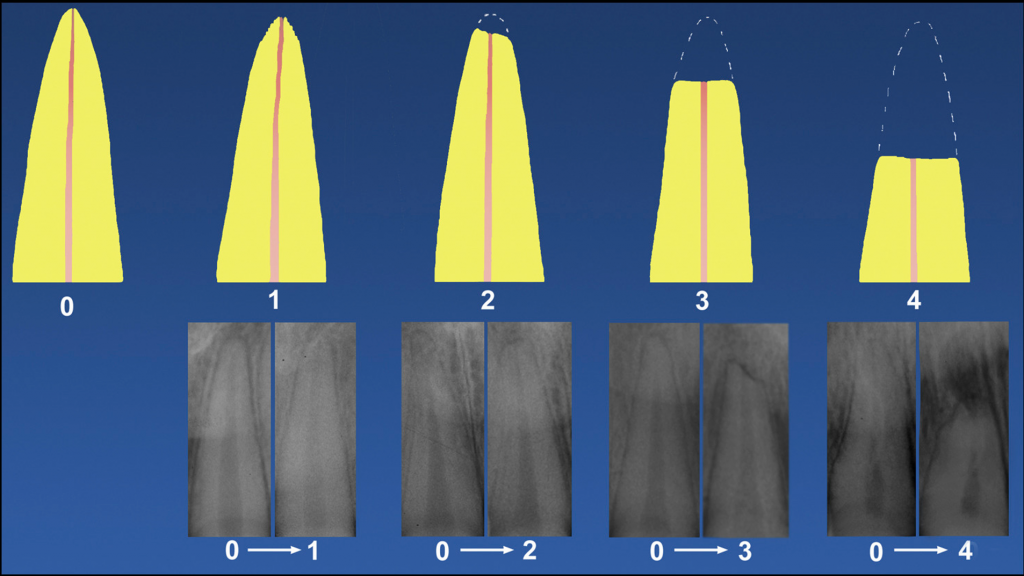 Although CBCT assessment has been found to be of greater accuracy, infrequent changes to treatment plans occur after CBCT analysis when compared to periapical radiographs Alqerban 2014.

There are two principal factors which result in either repair or loss of root length when localized inflammation occurs, they are:

The focus of the remainder of the blog will be to explore the effects of orthodontic mechanical factors on root resorption, the main findings are taken from Currell’s 2019 systematic review on the topic

The greater the orthodontic force, the greater the magnitude of local inflammation, resulting in greater root resorption occurring, in the studies a light force of 25g was compared to 225g Paetyangkul 2009, Wu 2011,

Intermittent force (such as elastomeric chain or loop mechanics) lead to less root resorption when compared to continuous forces (such as closing coils) Sawicka 2014, Aras 2012. This is an interesting finding which demonstrates periods of rest between forces allows repair to occur.

Specific type of tooth movement are united by the weak nature of the evidence available, below are the details of the effect, however it is to be taken with caution due to the strength of evidence being weak.

We hope you have enjoyed this blog, This blog started with a conversation between Kerolos AlHakeem, Farooq Ahmed and James Andrews, to follow more conversations, clinical tips and commentaries on orthodontics please check us out on Instagram: