Curve of Spee - How do you level the playing field

The curve of Spee is a common diagnostic finding, however the cause, method of correction and indeed even if it should be corrected are debated topics. In this blog we explore the curve of Spee, with an explanation of different strategies for correction, as well as research findings of the methods.

What is a curve of Spee?

The Curve of Spee is a naturally occurring phenomenon, originally described by Ferdinand Graf von Spee in the 19th Century. The curve of Spee in contemporary terms refers to the arc of a curved plane that is tangent to the incisal edges and the buccal cusp tips of the mandibular dentition viewed in the sagittal plane Ramfjord 1971.

Curve of Spee has an interesting development during growth. it is all but absent in the primary dentition, however when the 1st molars erupt there is a significant increase in the curve. The cause of an increased curve of Spee are varied, including skeletal vertical and antero-posterior discrepancies Fidler 1995, as well as dental causes of unopposed lower molar eruption for six months, and the lack of an anterior occlusal stop. The mechanical reason proposed is the imbalance of posterior and anterior occlusal forces Marshall 2008. The imbalance of forces can result in over-eruption of the anterior teeth, infra-eruption of the premolars, and mesial tipping of the lower posterior teeth Stange 1950. Either way the effect is manifest again with a ‘second coming’ of the deep bite when the second molars erupt. After the eruption of the second molars the curve of Spee remains relatively stable into adulthood (Marshall, 2008).

Should we level the curve of Spee?

It is curious that a naturally occurring observation from Andrews in his classic study which established the ‘6 keys’ of occlusion, the curve of Spee was observed in ideal samples, yet was considered undesirable as a ‘key’. Andrews commented on this discrepancy by stating, ‘even though not all of the orthodontic normals had flat planes of occlusion, I believe that a flat plane should be a treatment goal as a form of overtreatment’, Andrew’s considered overbite to increase with time, and therefore a ‘flat’ plane at the time of completing treatment would ensure the ‘ideal’ curve in the long term for the patient.

How much space does it take to level the curve of Spee?

Controversy exists over how much, and even if space is required to level a curve of Spee. There has been an evolution of thought. Initially it was believed there was a ratio of 1:1, i.e. for every 1mm depth of curve, 1mm was required (Baldridge, 1969). However, this linear relationship proved to not be accurate, and a series of experimental and clinical studies showed less space was needed, but more importantly that other factors were found to be at play;

We have averaged 6 experimental studies on the topic and it is presented in the graph below, showing significantly less space is required than the ‘rule of thumb’ when compared to experimental findings to level the curve of Spee (Germane 1992, Garcia 1985, Baldridge, Braun 1996, Kirschen 2000)

How to level a curve of Spee?

The aggregation of the above information, distilled and cooled to room temperature, is that there is no one method for levelling the curve of Spee. Although the term curve of Spee implies a single presentation, in fact there are several different presentations of a curve of Spee, there are ‘Curves of Spees’.

There are three main methods for levelling the curve of Spee:

Intrusion vectors can be achieved through sectional / auxiliary mechanics (such as Rickett’s Utility Arch Burstone Intrusion Arch). The indications for anterior intrusion are high angle cases or where proclination of lower incisors is undesirable. Light forces are indicated for anterior intrusion, with reports of no root resorption when used Baumrind 1996.

A term given to a continuous archwire with an intrusion curve swept in anteriorly. The mechanics are simple to deliver, and sliding mechanics can simultaneously continue, the active or ‘reverse’ component increases the moment generated when compared to a continuous archwire, and can therefore be considered more effective method. However the reverse curve has earned a reputation of contempt from biomechanically inclined clinicians (i.e. Kerolos and James, whereas Farooq is, and will remain, a fan of simplism). A reverse curve of Spee has an intrusive component anteriorly, however due to being a continuous archwire there is a rotation / moment generated both anteriorly and posteriorly. The effects are: 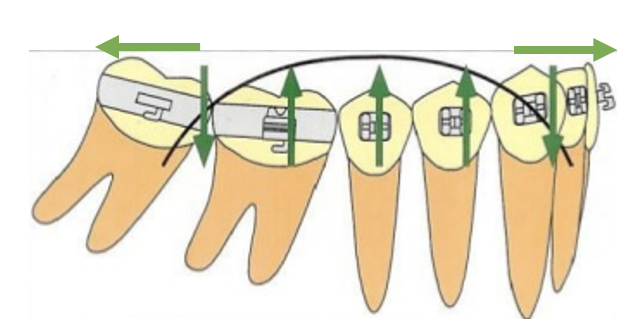 The use of negative torque prescriptions, such as MBT brackets was proposed to resolve unwanted proclination, however a study assessing round Vs rectangular continuous archwires found in both cases similar levels of proclination and uncontrolled tipping occurred AlQabandi 1999.

To add further variability of the use of a continuous archwire / reverse curve of Spee, the vertical facial type effects the tooth movement. Low angle facial types experienced greater anterior intrusion, whereas high angle patients experienced greater posterior extrusion Rozzi 2017. An interesting finding which opposes what is usually desirable, i.e. posterior extrusion for low angle patients and anterior intrusion for high angle patients. Another reason to reconsider the use of continuous archwires for the correction of a curve of Spee.

Historically is was thought posterior extrusion was unstable due to increase in the posterior face height would relapse with muscular forces, however a study compared anterior intrusion mechanics with straight wire appliance mechanics and found no difference in stability Carcara 2001.
The appropriate mechanics depend on the mesial tip of the posterior teeth, and distal tip of the anterior teeth, the content below is adapted from the Charles Burstone’s exceptional book

‘The Biomechanical Foundation of Clinical Orthodontics’ 2015.

Mesially tipped posterior teeth require both vertical movement as well as a distal rotation. This can be achieved through a segmental archwire with the mesial bend anterior to the center of rotation, this results in an extrusive and distal moment to the posterior teeth.

Goh, S., Dreyer, C. and Weir, T., 2022. The predictability of the mandibular curve of Spee leveling with the Invisalign appliance. American Journal of Orthodontics and Dentofacial Orthopedics, 162(2), pp.193-200.

We hope you have enjoyed this blog, This blog started with a conversation between Kerolos AlHakeem, Farooq Ahmed and James Andrews, to follow more conversations, clinical tips and commentaries on orthodontics please check us out on Instagram / facebook